Good Morning. Today, it is a very Springlike 65 degrees, in the winter. Usually we are in the 30s. I wonder if we will see snow this year…

Today, when I opened the book of John, I read about the woman caught in adultery and Jesus as his own witness. The leaders brought a woman to Jesus, saying that she had committed adultery. Under the law of Moses, she should be stoned to death. They tested Jesus and asked him what to do.

God often answers us with a response that we did not imagine. We can only see one right answer. Yes or no. Follow the law or do not follow it. Finally Jesus says that he who has not sinned can throw the first stone. Then, he stooped down and continued writing on the ground. 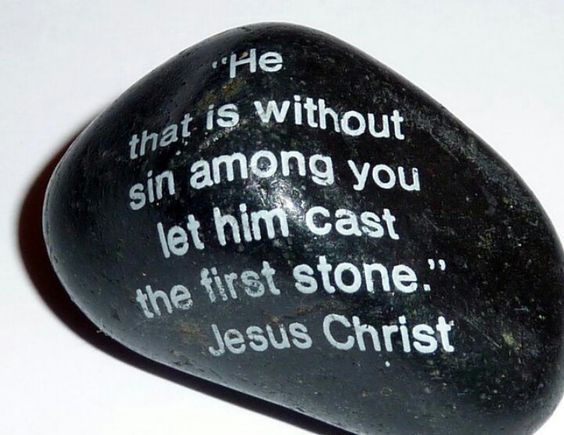 So when they continued asking Him, He raised Himself up and said to them, “He who is without sin among you, let him throw a stone at her first.”
–John 8:7 (NKJV)

One by one the crowd disappeared. I wonder if they were angry or reflective. Did they think, oh, he got us again? Or, did they actually look at themselves and their own sins and feel remorse? I think Jesus was trying to get them to look inside their hearts, instead of pointing out the sins of others.

Jesus looked up and saw only the woman, and asked where the accusers were. Not one was left. Jesus will not condemn her neither and tells her to sin no more.

When Jesus had raised Himself up and saw no one but the woman, He said to her, “Woman, where are those accusers of yours? Has no one condemned you?”

And Jesus said to her, “Neither do I condemn you; go and sin no more.”

It is always easier to judge other people, then to look at ourselves and make judgements. I feel like I am always working on the same things, and when one issue gets better, another arises. God knows that we struggle with certain things. God will help us. Sometimes, we get embarrassed that we did too much to return to God. That is not true. God loves us all, no matter what we have done. God welcomes us back anytime. Trying to do God’s will not make you perfect. Instead, it will give us peace and contentment, while we try and do God’s will.

Jesus said that he is the light of the world. When you follow Jesus, you will not walk in darkness. Instead, our lives will have light.

Then Jesus spoke to them again, saying, “I am the light of the world. He who follows Me shall not walk in darkness, but have the light of life.”
–John 8:12 (NKJV)

Who doesn’t want a life without light? I want the light of life.

My name is Karen Jean. I am a Christian working on my flaws. I am a wife to a great husband and a mom to our two beautiful children. I reside in Ashburn, Virginia. Thank you for reading my blog! I would love to hear your feedback and comments. View all posts by Karen Jean

This site uses Akismet to reduce spam. Learn how your comment data is processed.